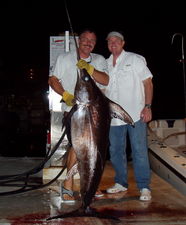 The fishing for us has been very good. This past week we fished twice in the day and twice at night. The daytime fishing was good with action almost all day long. There has been a decent showing of kingfish from the 8 pound to 20 pound range. These fish have moved back to the 100 to 130 foot depths. When youre not getting bites from kings, the bonitas will keep you busy. If you move out a bit you can get into the dolphin. The dolphin fishing on the edge has been OK. You can catch a few dolphin a day live baiting the edge. There have been some dolphin offshore although it is usually hit or miss. Weve have scored on the dolphin in the late afternoons while heading out to the sword grounds though. There have also been some sailfish around. We caught a sailfish on one of our day trips.

It seems that the nighttime action for swordfish is where it is at. Since last week we went twice. The first night we caught 4 out of 5, releasing two small fish. The good thing about how we fish for swords, is that if you do get a small fish, you can bring him to the boat quickly and in good shape that the fish can be released to grow. That night we actually had a tripleheader of swordfish on and even with all the chaos were able to catch all three fish.

Our second trip this week was equally as good as we caught 3 out of 4 fish, but the fish were a bit bigger. We caught a 180 pound fish, a 150 pounder and released an 80 pounder. All the fish that night were fired up and were streaking across the surface, diving hard and really pulling some drag. I had one of my best customers with me and his friend, as was extremely happy that I could show them what good swordfishing is about.

We are supposed to go again tonight and luckily the disturbance to the south has dissipated. After that we head over to the islands for a few days then come back and go straight to Islamorada for the Islamorada Swordfish Tournament. I only have a handful of dates left in August as the sword trips are starting to book, but I do have some weekend dates open so give me a call and lets go catch-em!