Another two very busy weeks have gone by and I fished almost every day. We have had a variety of trips including another trip to Bimini for hi speed trolling for wahoo, quite a few daytime sword trips as well as some trips on the edge. Starting with the daytime swords, I am extremely ecstatic to say that we have caught and landed at least one swordfish on every single trip we had and we have had a few trips were we have caught two swordfish per trip. The majority of the fish are between 100 and 250 pounds and although we havent caught any 400-pound plus swords these past two weeks, I did hear of a 483-pound fish caught as well as a 350-pound fish. This is the time of year for the big fish to be pushing through our area, so hopefully we will tangle with one of these big girls on our next few trips. We also caught a big thresher shark that we released. Thresher sharks definitely fight hard and will test your tackle and stamina.

As I mentioned we also did a wahoo trip to Bimini and although we did not crush it, we caught wahoo on both days that we were there. The reports I have gotten back are about the same, it seems everyone is catching a few fish, but nobody has really crushed it yet. We were hoping to crush it this weekend as I have a wahoo trip scheduled for Saturday and Sunday, but unfortunately the weather will keep us on this side and we will more than likely fish the edge.

Speaking of the edge, I did have some trips on the edge as well and while some were slow, some were ok as well. The slow trips were mostly due to lack of wind, current and lots of green water. Those trips we resorted to catching AJs on the wrecks, and bonitos, skipjacks and other fish to help bend the rod. When the blue water finally moved in and the current picked up we did manage to catch a few sails. One half-day trip we caught a double header and missed another one and another trip we caught 2 sailfish (singles) and a few mahis.

I do have quite a few daytime swordfish trips still booked, but as we get into November and December, the emphasis will shift towards sailfish. On the calmer days we can still target swordfish offshore in the Gulfstream, but for the most part will be kite fishing for sailfish on the edge. The sailfish are already showing up north of us and it only takes a few cold fronts to get the big body of fish down to us. As I mentioned, we are already seeing a few sails and this cold front that is just coming by, will push more fish to our waters. So as you can see, now is the time to book your winter trips for sailfish season. Although I have some bookings all the way out to May, I still have plenty of dates open. Weekends though are already filling in pretty quick. Call now and lets set it up and lets have some epic days out on the water. 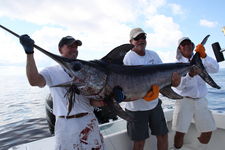