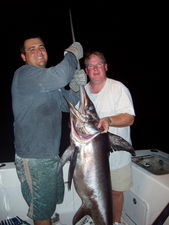 Swordfishing this past week and weekend was on fire. The wind blew from the NE at 15  20mph most of the week, but when it calmed down, the fish were out there waiting. There were two swordfish tournaments this past weekend. I did not fish them since I was already booked months prior before any of the tournament dates were announced. I believe there were over 100 swordfish caught in one tournament that 78 boats registered. There were at least two fish over 300 pounds caught in those tourneys. The bite was definitely going off.

We swordfished three times last week. The first night we caught 5 with the largest at 130 pounds. We tried to catch one on fly that night, but all our bites came on the deep lines. We fished with a 5 time MET Master Angler and it was a pleasure to see how a very good angler plays out these fish. As I tell most anglers, you cant out muscle these fish, but you need to outsmart them and to take full advantage when they give you the opportunity. That is exactly what this guy did and it worked out great as he never missed a fish. The second night we caught two and released one more. We also had three other fish on, but managed to pull them off. Out of the ones we missed, one of them we had on for a few minutes that was grey hounding all over the place. This fish looked every bit of 250 pounds and it was quite the sight to see a fish of that size jumping in the moonlight. Although we pulled that one off, it didnt matter though, since this angler got to catch his first few swordfish. The last night we fished (Sunday night) we went three for six. We started out missing our first one. Then we hooked a real one that we fought for almost an hour with some serious drag on it. It was a father and son combo that first fought this fish stand up and after about 45 minutes we decided to put it in the holder. This fish was no joke and although I never saw it, just by the bend of the rod and the ability of this fish to take line easily whenever it wanted, it was clear in my mind that this fish was well over 300 pounds. Unfortunately we never got her, so we can never tell, but one of the reasons we go out all the time is to catch fish of that size. While we were fighting that fish we actually caught and released a smaller one which gave the dad his first swordfish. We then caught two more swordfish and called it a night.

During all the swordfish trips we also managed one day trip. The day time fishing has been slow, be we got lucky and caught three sailfish (a doubleheader and a single). That was a lot of fun since none of the guys on the boat had ever caught a sailfish or any billfish. We should start seeing more and more sailfish move into our waters very soon. I did hear of some decent dolphin caught offshore and there have been some decent size AJs on the wrecks.

Thats it for now as I am getting ready to do a swordfish seminar at the Miami Sportfishing Club tonight. If you read this in time and want to go, give me a call and I can send you directions. For those of you who havent caught a broadbill or simply want a bigger one, this month and next are excellent months for both quantities of swords caught as well as size. Some of my biggest fish have come in October and November, so lets go and catch a SLOB!