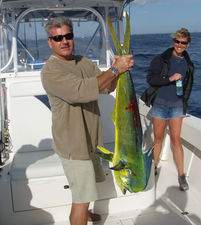 We are getting into spring mode and are now concentrating on both day trips as well as night trips. The weather becomes more predictable and we can now start booking more sword trips with confidence in the weather.

As usual, dependent upon the conditions, the day fishing has been either on fire or has been just OK. When we had good north current and NE winds, we did very well on the sails and the dolphin. Our best day was 7 out 10 sailfish. Dolphin have pretty much been a daily catch and most of the dolphin have been of decent size. I would say that the majority of the dolphin have been between 8 and 25 pounds with very few below 5 pounds. The kingfish seemed to have slowed down, but that is definitely temporary as April and May can be great months for big spring kings. The blackfins have also not shown up yet in large numbers but we have been hearing of repots of one or two caught almost daily. We have already booked a few late afternoon tuna trips so if you want to get in on the action give me a call. These trips are great as you can go to work and work practically all day and then head out around 4:00pm and fish for blackfins until it gets dark.

This past weekend we went swordfishing both nights and caught fish both nights. The swordfish bite hasnt been red-hot but we have seen some of the coolest stuff every night. I do predict that the sword bite though is going to get very good; you just got to be out the right night. Saturday night we had one of my best clients and one of the best people you can every meet. He has sworded with me many times and we have had great luck. As we headed out, we found some dolphin and took a few home for dinner. We got out before the sun went down and got all our baits in the water. After it got dark we saw a few taps on the tip rod. We quickly got the bait up and a small sword followed it up. We baited him right on the surface and he ate right out of our hand. After a short fight, we boated our first sword of the night. About an hour or so later, we saw a large tripletail heading right to our boat. Behind it was a very large fish. If it was a sword it was going to be the mother of all swords. Instead it turned out to be an extremely large mako shark. Without exaggeration, it was at least half the size of my boat which would put it at 17 feet. I guess the weight was at least 600 pounds. The tripletail raced and put itself between the two motors. The shark nosed his way between the motors and spooked the tripletail out. Wherever the tripletail went, the mako was a foot behind it sort of just toying with this fish. We tried bating the shark with squid, live bait and even a piece of the swordfish, but this shark only showed interest in the tripletail. We even tried to gaff or bait the tripletail, but no success. The mako was so close that you could touch it at any given moment. One thing for certain, this shark showed no fear of the boat and was definitely showing us why he is the ultimate predator out there. After about 5 minutes, the shark dove down and a minute later our short jug starts screaming. We had the monster of sharks on but with any trace of wire or cable, he chewed through the leader after a few minutes. The rest of the night was slow. We had one more bite that we didnt connect on, and then went home. We did get a swordfish and we also got to see an amazing predator that you just do not see that often at that size.

The following night we headed out again and on the way out we saw a fee jumping large blue marlin. As we got closer the fish sounded and we never had any shot at her. As it got dark, we had our first bite on the tip rod. We reeled up only to watch the swordfish steal it from to hook. A few minutes later our next closest rod got tapped but no connection. A half hour or so later, out from underneath the boat comes another large shark. Instead of a mako shark it was a large tiger shark. I didnt recognize it at first, bit it had a large rounded snout and had spots on it. This tiger was at least 250 pounds. It showed no interest in anything and just kept moving through. A short while after that we got another bite on the tip rod. The rod tip bent twice and then went completely slack as the sword had the bait and was screaming towards the surface. We got tight on her and shortly thereafter had the leader in our hands on a few occasions. She darted out from under the boat and the hook pulled. Technically we did catch and release that fish, but we all would have liked to see her on the deck. My best guess was 150 -180 pounds. A young man (teenager) caught that fish and congrats to him on his first sword! An hour or so later we saw some flying fish getting busted and within 50 feet of the boat we had a small swordfish free jumping and chasing flyers. At one point I thought this fish was coming in the boat. We did get one more bite that we missed, but overall we saw at least 4 swordfish that night and one cool looking tiger shark.

Like a mentioned earlier, this is a great time of year to fish either day or night. We have already booked quite a few Bahamas trips, so f you are interested in heading across, give me a call before the dates are gone or al the hotel rooms get booked.

Swordfish tournaments are also about to begin. We will be in the Bahamas for the fist sword tournament but we are available for the Islamorada Swordfish Tournament in August. We got third place last year and that was the first year we fished down there. This is a WBS event and if anyone is seriously interested, please let me know and we can work out the specifics.