Just When You Think You Have It Figured Out!

Every time we step foot on the dock we hope and truly try to have a great day of fishing and catching. Sometimes the fish don't cooperate and sometimes they do. The only constant is that me and my mate Billy always try as hard as we can. The good news is that the vast majority of our trips this past month have been outstanding. We have caught sailfish on every one of our last 20 trips with the exception of two and during those two other trips we did catch other types of fish. We have been averaging a few sailfish per trip and our best day was 6 sailfish. This trip illustrates how when you think you have figured it out, guess again. I had my good customer Michael book a trip and they day before the trip the weather forecast was terrible calling for rain and wind all day. The wind doesn't usually stop us, but rain is a problem for kite fishing. Michael couldn't switch his dates so off we went in the rain. Michael commented not to worry that it was going to be a great day, although I really thought otherwise. We delayed the start of the trip by a couple of hours, but the rain didn't stop. We fished all morning without a bite. It was raining, green water and no current. About mid-day I got a call from a friend stating he found blue water and north current way down south. We pulled in all our lines and made the trip 20 miles to the south. The rain finally cleared, and we found the good water and current and put the baits out. Soon enough, we hooked a doubleheader of sailfish. We caught both and put them out again and caught a single, followed by another doubleheader and another single. In three hours we caught 6 sailfish and it was time to go. I guess Michael was right. The next day we had a ¾ day booked. We were greeted by beautiful water with ripping current and bluewater. I was sure we were going to crush them, but wouldn't you know the sailfish had other plans. There were a slew of boats out and basically nobody really caught any fish. We managed some bonitos and some sharks and a kingfish but no sails. So, when you think you have them figured out it doesn't always happen. 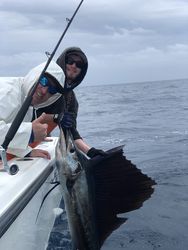 Besides sailfishing we also did a trip to Bimini with my good client Roger and his relatives. We had a terrific day catching 9 wahoo and some cudas high speed trolling. The wahoo were all very decent in size. Two fish were in the teens, but the rest were between 35 and 49 pounds. Attached is a link to a video I made of our trip. https://bit.ly/39m8FVu
Check it out and let me know what you think. 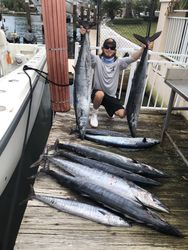 We also did a swordfish trip with Roger and a friend of his. I called him and told him the sword bite has been very good. I rarely do that because as you know the bite can be good and by the time you go or depending on the conditions that day it can be slow, and you end up looking like a fool. But Roger understands this fishery and we have always done very well in January and February with him for sword fish. Well we didn't disappoint Roger! We made our first drop and caught a 182-pound swordfish that did everything to get away. We got the swordfish next to the boat and Billy got a harpoon in him. The fish got pisssed and pulled off a bunch of line and the hook pulled. We now had him on the dart line which we had connected to a conventional reel. We fought the fish on the reel, got the dart line back and got the fish but not before he made a bunch more jumps with the dart stuck in her back. It was quite the sight to see the fish jumping with a 10 ft harpoon in her. It looked completely outrageous. We made another drop and instantly hooked another swordfish. This swordfish also jumped. Usually swordfish can make a jump or two, but this fish started tailwalking like a sailfish and then started tailing downsea like a big blue marlin. Another good dart shot by Billy followed by some quick gaffs shots and we boarded a 225-pound swordfish. With two nice swords on board we headed back and were back to the dock by lunch. What a great day of swordfishing! 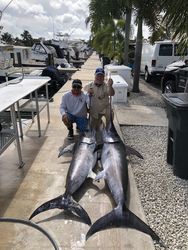 February is almost completely booked, and March is filling up quickly. The past few years February through April have been our best sailfish days, especially March and April. Also, the daytime swordishing the last two years has been great in February through April. Now is the time to get in on that action. I also have an online calendar on my website now so you can check out the open dates and book a day before it gets taken. Take a look and letâs go fishing!