Operation Sailfish out of Palm Beach was just this past weekend and was our first sailfish tournament of this season. I am running a beautiful brand new 39 SeaVee with twin IPS drives and a tower. This is one of the most amazing boats built and is definitely the most maneuverable boat on the market. We left for Palm Beach a few days before the tournament to do a little bit of pre-fishing especially since this is not our area. The first day a cold front had just come through and we found lots of life and decent water, albeit no real current, right in front of Palm Beach. We did some scouting and some fishing and ended the day going 6 for 6 on sailfish and quite a few mahis. The 2nd pre-fish day we went past Jupiter and fished up there and although we did find current, the water was green and we ended up going 2 for 2 on sails and again some mahis.

The first day of the tournament and after getting all the intel from the day before, we decided to go back north and fish up there since there were a few boats that had seen quite a few fish up there. From lines in to almost 3 hours into it, we had not seen a fish although we did see some boats in the area hooking up. After three hours or so we moved to where we fished the first pre-fish day and set up and again no bites. After about an hour we decided to make another move farther south. We are now almost half way through Day 1 and we have not caught one sailfish. The lead boat I believe had about 5. Around 1 pm we see and catch our first sail. We then catch another within a few minutes of releasing or first. About a half hour later we catch another one so now we have 3. About an hour goes by and we hook a triple-header and catch all three. Now thing are getting serious as we are in third or 4th place. About ten minutes before lines out we catch another sailfish and that proves to be the money fish. With 7 sailfish releases we are in second place (the lead boat also has 7 fish but leads on time) and most importantly that 7th fish placed us in the 2nd place daily calcuttas with a payout of over $45K. In some tournaments that would be more than if you had won the whole tournament so we are all psyched and ready to go the next day.

The second day of the tournament we went back to our hot spot and within the first two hours we caught 2 more sailfish and that moved us into 1st place. About noontime we had not seen any more sailfish but we were seeing boats around us catching them so we were definitely in the right area. Unfortunately for us we did not catch another sailfish that day and we slowly dropped from 1st place to 9th, but with our strong showing the first day we had won over 45K which is more that all but 4 boats did the tournament.

This just goes to show you that being properly prepared and taking advantage of all your shots is what is important in these tournaments. We went 9 for 9 in the tournaments and 8 for 8 in the practice days. I am extremely proud of my team and could not ask of anything more of them.

I am looking forward to our nest tournament in January. For us we have won money in the past two tournaments (last tournament we got 3rd place overall and quite a bit of money). Hopefully our good luck will continue.

Now as far as fishing Miami, the sailfishing is definitely getting hot and we have caught sailfish on all our trips but one. The best day we had was 6 fish and had quite a few days catching 3 to 5 sails a day. The holidays are almost here and I still have some days left so if you have friends or family coming to visit or if you just want to get back out on the water, give me a call and lets go catch some fish. 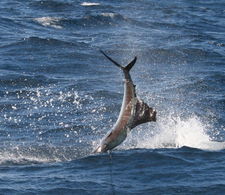