Trip of a Lifetime!

Sorry for the delay between reports but I have been extremely busy and also took a short trip to Venice Louisiana to catch big yellowfin tunas. The trip to Venice was very successful and I had a blast catching fish and hanging out with friends.

In Miami, we have been doing mostly swordfish trips as well as a few trips on the edge, and a few trips offshore for mahis. All but one of the trips on the edge produced a sailfish as well as some kingfish and a handful of mahis. Offshore, the mahi fishing has been very good with big weed patches 12 to 15 miles offshore. The mahis this time of year are almost always bigger than the minimum size and are all keepers with most fish being heavy lifters or gaffers. The sword trips have been a spotty. We have gotten sword bites on every trip but one, but we havent been always successful on getting the fish to the boat. We even released a 400-pound sword on the leader and the intent was definitely not to release it, but things dont always go as planned. We have caught swords from 180 to 80 pounds the past two weeks and as you keep reading the report, we caught a 200-pound sword just a few days ago.

Every now and then, we have a trip that is simply outstanding. If you fish as much as I do, it is only a matter of time until you get these once in a lifetime trips.
That trip happened just a couple of days ago. I had two new customers from San Antonio Texas, Jimmy and Tino. We headed offshore to try to catch a daytime swordfish. I ran south and made a drop and there was virtually no current. The current in the Gulfstream is usually 4 to 5 knots. That day it was 0.7 knots. After no bites on the first drop, I headed north to fish another spot. On the way there, I spotted a weedline further inshore. From the tower, I slowly ran along the line until we found a school of mahis. We started pitching live baits to the mahis and were soon in a full-blown mahi madness catching fish left and right. While we were catching mahi I looked further up the weedline and see a big blue marlin under the weedline batting 5 pound mahis in the air. All you can see is an explosion of weeds and mahis flying in the air. As we got closer, the marlin disappeared. Further down the weedline we found a piece of rope with weeds on it and we started catching more mahis. After 30 minutes or so, we see the same blue marlin chasing the mahis around the boat and at one point the blue marlin was within 30 feet of our boat. This fish was big and mad and was batting mahis around like they were going out of style. The fish then disappeared again. At this point we started trolling by the rope and started catching a few wahoos. I told Leo my mate to get one of the dead dolphin and pin it on a big hook and attach it to one of the 80wides we had on board. While we were trolling for the wahoo, which we ended up catching 4, we skipped the dead mahi on the surface behind the boat. After a few minutes, the line popped off the outrigger clip with a bang and we now had the blue marlin on. Leo quickly got Jimmy into the stand up harness and the fight began. After about 30 minutes, we had the big blue marlin on the leader and successfully released her. I estimated her at 375 pounds. Jimmy had never caught a blue marlin before and even though we have caught them before, catching one in Miami is not that common. After high fives by everyone, we decided to go try for a Swordfish. We ran offshore a few more miles, got our bait ready and made a drop to the bottom. Within minutes we were getting sword bites. After 5 or 6 quick bites the rod loaded up for 15 seconds or so but then the fish was gone. My heart sank, but I was determined. I dropped the bait back down and started working it back up and there she was again tapping the bait every few seconds. I thought she was gone, but I was so thankful that she stuck around. After a minute or so of manipulating the bait we finally had her on and Jimmy now proceeded to fight the swordfish. The fight from the bottom to the top was uneventful, but when she got closer to the surface the fight began. No mater how I drove the boat or how much pressure Jimmy was putting on her, that swordfish wanted to go under the boat and towards the bow. I would swing the boat inshore and she would head offshore, I would swing the boat offshore and she would swim inshore. This went on for over 15 minutes. The one thing I was grateful though is that she was not heading towards the props but always towards the bow. After a short bit we got her in range and as I leadered her up, Leo got a good shot with the dart and it was game over. The sword was about 200 pounds and was Jimmys first swordfish as well. It is not often in Miami that you can catch your limit of mahis, 4 wahoos, a 375 lb. blue marlin and a 200-pound swordfish. These trips dont come often but when they do you have to savor them as long as you can.

Although all trips cant be like the one mentioned (I wish they could) the only way you have a chance of a trip like that is to get out and go fishing. With the day sword season in full swing, wahoo fishing already starting in Bimini, and the sailfish season just around the corner, give me a call and lets set up that trip! 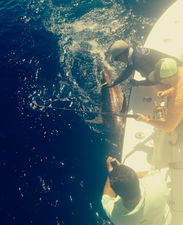