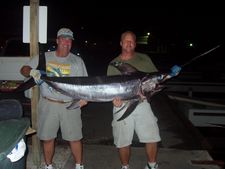 WOW! What a month. This has been the busiest June I have ever had. I ended up fishing 27 days this month. I spent more time in the Bahamas than I did here, and when I was here, I was either swordfishing or dolphin fishing. Luckily the fishing has been very good. In the Bahamas we were primarily catching yellowtails, muttons, some groupers, big kingfish, big amberjacks, sharks and lots of other species as well. I am actually heading back tomorrow for the mutton fishing.

Here in Florida, I had a few dolphin trips that were all pretty good and some swordfish trips. The swordfish trips we have done fairly well to excellent. We did have one night that we didn?t get any bites, but on the average have been getting 3 or more bites a night. Our best night we had 8 bites and caught two and last night we went 3 for 5.

I mention last night specifically because it was truly a night that I won?t forget any time soon. We started the night with a fish on right before dark. The jug popped, some drag burned off, we got tight for a few seconds and the she came off. We then had a long time with nothing. About 11:30am the tip rod goes completely slack, and the fish is racing to the surface. We got tight and had the fish about 50 feet from the boat and the hook pulled. As we continued reeling up the bait, the sword follows it all the way to the boat. We tried to bait it with another bait, but no interest. It was a decent fish of at least 100 pounds. A bit disappointed, we are now sitting at 0 for 2. About 1:00 am the deep tip rod gets hit twice, and a few seconds later the rod bends over and starts taking drag. We get tight and now the reel starts singing. The fish burned up some line and my anglers decide that I should fight this fish. I get in the harness and in almost 20 minutes, we get the fish to the surface. The wind on leader is all the way to the rod tip, we get ready to harpoon the sword and she decides no way and burns off about 300 yards of 80 pound line. Since we got her so close we all agreed that this fish was a solid 250 pounds. An hour later, the fish rushes to the surface burns off about 400 yards of line on the surface and you can hear her jumping in the moonlight. As she settles back down, one of the other jug baits gets hit and now we have a double header. Both are decent fish and I have one guy fighting the second sword off the bow with about 22 pounds of drag, and I am still fighting the first fish with 26 pounds of drag. About 15 more minutes go by and the last jug bait gets nailed. At first I thought, maybe the second fish got tangled up with that bait, but they now separate and we have a triple header going. Obviously the cockpit is utter chaos at this point. I unstrap myself from the rod and we are now fighting three swords out of the rod holders. The second fish comes boat side after about an hour. I stuck her with the gaff and the harpoon and hoist her aboard as we are still fighting two more swords. The fish we just boated was over 100 inches total length and had a lower jaw to fork length of 68 inches. She weighed in at 170 pounds at the scale in Keystone. We now get the bigger fish up again and have leader two more times, but she remained just outside of the harpoon. I put on the harness again and lifted her to within 5 feet from the surface. As we got ready to stick her she made a slow dive under the boat and then burned off 50 yards of line on the surface. I frantically got on the transom, undid the harness, a dipped the rod in the water and unfortunately after 2 hours and 20 minutes she broke us off between the motors. Either way we got an official release a few times and we still had another fish on. Now we were free to concentrate on one more fish. We ended up boating the third fish, which had a fork length of 57 inches but fought so hard because she was hooked in the anal fin. We all took a deep breath and just realized that we caught all three fish out of a triple header and these aren?t sailfish we are talking about but three (one truly big) big swordfish.

Nights like this do not happen often. We have been lucky enough to have a few tripleheaders before, but were never able to land all three and they were never triple-headers with three very nice size fish. It just goes to show you, that sometimes, if you stick it out, have patience and a good crew, a lot can happen. Excited? Come check us out and lets go swordfishing a night or two. We may not have another night like this for a while, but who knows, we may have one even better!