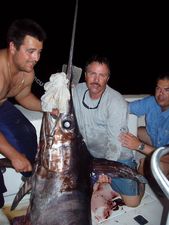 Even though you wouldn?t feel it during the day, summer is starting to fade and fall is approaching. That is a good thing as the fishing during the day the last week or so has been slow, but started to improve as this week progressed. There has been plenty of bait around, just not many predators to go with it. Luckily the bite improved somewhat over the past few days and should continuously improve. There have been just a few sailfish on the reef as well as some kingfish and a trickle of bonitas. The one good bite that has been happening has been the swordfishing. On the way to the sword grounds the afternoon, we saw a huge school of porpoises crashing bait and a school of 40 ? 60 pound yellowfin tunas joining in on the party. The school was impressive in size and was steaming south at full speed.

Now about the swordfishing. All my customers are important to me and if anyone knows me, they know that I try my hardest on every trip to produce fish. I take pride in knowing that I have done my best to put my clients on fish. With that said, every once in a while we get a charter that stands out a little bit more than normal. That was the case with Paul and Christie who chartered me for two nights of swordfishing. It started with e-mails and phone calls and we just got off to a good start. On Monday Paul and Christie came to the dock and off we went. We get to the swordfish grounds and get our spread out. Within an hour we hooked our first fish. As Paul is fighting his first sword, we get another fish on. Now we have a doubleheader. Now I am fighting one as is Paul, and we get another fish on. Now we have a tripleheader of swords. I catch mine pretty quick and we release it. We also caught the third fish of the tripleheader and released that one as well. We know get Paul?s fish in the boat and decide to keep one for the dinner table since it is his first swordfish. It was a beautiful night with calm seas and clear skies and we had already caught and landed a tripleheader of swordfish. That in itself makes this a trip of a lifetime for most. The rest of the night we fought a few sharks and called it an evening.

The second evening we head out again with Christie and Paul. This time we had to wait a bit longer. We didn?t catch anything on our first drift so we made a move. Within a few minutes we had a swordfish on. We caught it and decided to release since we already kept one last night. After we released that one, within a few minutes another rod goes off. It took a bit of line out but not at an alarming rate. It actually felt and looked like we had a small fish that was foul hooked. After 20 minutes or so, we got the fish close to the boat and he decided to shake his head. The whole rod bent drastically as you watched him swing his big bill in the water. I told my mate Vick, that this fish is a bit bigger than we thought. For whatever reason, the swordfish didn?t take off, and I got the wind on through the guides and on the reel and pulled him towards the boat. We got one gaff in him that he tore out as he went nuts. We placed a second gaff in him and I put another gaff through the top of his head. Both my mate and I yanked this beast into the boat and still didn?t release how big it was. As it hit the deck, we both know knew that it was well over 300 pounds and green as can be. Needless to say, he went berserk on the boat and practically ripped the boat and us apart. My mate stood on his bill and I jumped on his tail. The fish was going ballistic and hit me square in the chest and practically knocked me over the side. My angler Paul is an ER doctor and I think he was pretty worried that I got hurt. I only had the wind knocked out of me, but just like falling off a horse, I jumped back on the swordfish and Vick and I finally subdued him. It felt like hours had gone by and both Vick and I were exhausted after fighting this animal on the deck of the boat. We took some quick measurements and the fish was 128 inches in overall length, 86 inches Lower Jaw to Fork Length and had a 56 inch girth. The fish was 337 pounds in weight. A few more interesting facts on this fish was that number one it never had our hook in him, but was lassoed around the bill a bunch of times. Good angling kept him on the whole time. Secondly, he had a large circle hook in the corner of his mouth. The hook was half deteriorated, and it is the style of hook that longliners use. This fish was probably hooked by longline gear, but somehow escaped, only to be caught by us. Needless to say we called it a night and went in. We took a bunch of pictures dressed the fish so Paul could have it shipped back home. It was a great two nights of fishing. Paul and Christie were already planning a big barbeque of fresh grilled swordfish for them and a whole lot of their friends!

Unfortunately fishing can?t be like this all the time, but just know that we will be ready and eager to put you on action like this if it materializes. If the fish don?t bite, it certainly is not due to lack of effort on our part, but if they do bite ? Watch Out as we are going to be READY!