Tuna Bite is ON!!

In the past two weeks the blackfin tuna bite has been totally out of control. We have been complaining about how the blackfin tunas have been missing all spring, but someone must of heard our complaints and let the flood gates open. A typical spring day on the edge should consist of a few mahis, some sails, some kings and a couple of tunas. In the past two weeks its been just that but instead of a couple of tunas, it been 6 or more tunas on every trip. Our best day was 12 blackfins in one day, followed by 10 blackfins just yesterday. These are all big blackfins as well with the average size right around 30 pounds. We have gotten them as big as 37 pounds this past week. The next good news is that usually the best tuna bite was late afternoon after say 3 pm and going just into dark. There have been so many tunas around that we have been catching them all day long. Although live chum is beneficial, again there have been so many that we havent even needed to live chum that much. Our best bait though has definitely been goggle eyes. The herring and pilchards have worked as well, but we seem to be getting the bigger blackfins on the bigger baits. If you really want to catch a blackfin tuna, now is the time. I dont know how long this insane bite will go on, but it is definitely as good as it gets right now.

Besides blackfins, there has also been a fair amount of sailfish around. You are not going to get the big numbers anymore, but the last few trips have produced 1 to 4 sailfish per day. We have had a decent breeze out of the East and NE and that has pushed in some of the bigger mahis as well. Mix in some kingfish and some bonitos and it has definitely kept the rods bending practically all day long.

Last week, we had a multi-day charter from California who wanted to target and hopefully catch two species. They were swordfish and tarpon. We were lucky enough to be able to get this angler both of those species. We caught a 100-pound swordfish during the day followed by a 100-pound tarpon the following night. Having a target species in mind and catching it, makes the trip even more rewarding.

Now that we are going into June, the daytime swordfish trips and the trips to the Bahamas will take up much of our time. I still have openings for the first two weeks of June as well as openings in July. From what I hear, the yellowfin tuna bite in NW channel has also been on fire as well as the mutton snappers on the bottom in the Bahamas. Dont delay, lets plan out that trip of a lifetime!! 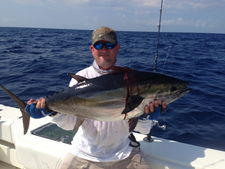