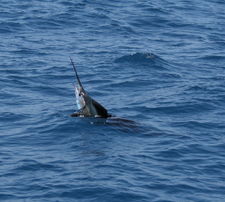 The end of April and so far May, have proved to be a great time to fish in South Florida. The last week of April we saw a push of really big dolphin on the edge and in the Gulfstream. There were a lot of 40 to 50 pound dorado caught. One day, it seemed that anyone who ventured out had at least a 30 pounder in the box. It was great fishing for the big mahis. That seems to have tapered off, but now we are seeing a one of the best late season sailfish bites that I can remember. We have had as many as 15 shots one day (we caught 8 that day), we also had a day with 9 releases and multiple days with 4 to 7 releases. Add a few blackfin tunas, some kingfish and a big mahi or two, and now we are talking of some great action on the edge.

The sailfish have been from Haulover all the way down to Pacific Reef. One day we found a beautiful edge in front of Haulover and caught 9 sails. The next few days the water looked better in front of Key Biscayne and we caught 8 in front of the Monument Buoy. The key is to find clean blue water with north current and then have quality baits and make it happen! Also take advantage of every opportunity. Try for doubles and triples instead of singles. Who knows you may even get a quad. We had a late afternoon trip one day. We had caught a few nice dolphin and a sailfish already. Towards the end of the trip, we hooked another single sailfish. That single quickly became a double. We released one out of the double and we were still fighting the second fish. Then the entire second side got hit and we had a triple header on the left kite so we had now had a quad of sailfish on and we had just released one minutes earlier. We actually landed all of those sails with three anglers and me. It was a tremendous amount of fun!

There have been a few blackfin tunas around. We havent caught them on every trip, but it seems that at least a few are being caught every day. We have been running some late afternoon trips and have caught the tunas on all but one of those trips. Live bait was very tough for a while, but now it has gotten a little bit easier. With more live bait that we can use to live chum with, the better our possibilities of catching a few blackfins. The good news is that most of the blackfins have been from 30 to close to 40 pounds. It is quite a sight to see a tuna explode on your kite bait. When that happens, there is no mistake of what has just eaten your bait.

The tarpon fishing has also been good. Almost all of the tarpon are close to or over 100 pounds. Some are even bigger. We did hook one tarpon that was easily over 150 pounds. It was quite the sight to see that fish jump out of the water. You could see her gills flared and her mouth wide open. We didnt land that one but did catch another fish over 100 pounds a few minutes later.

Swordfishing at night is still slow, but the sword bite during the day seems to have picked up in that last week or so. I heard of a few fish from 300 to 200 pounds being caught. I went out targeting day time swordfish two weeks ago. We caught one big mahi, and an oilfish while we dropped but now swords. With the swords being slow, we came in to the edge and caught 5 or 6 sails as well as some mahis. So we still managed to have a great day. The key is to be flexible enough to target the fish that are biting that day.

I hed out to the Bahamas a few times this month, but have plenty of days (and late afternoons) open this month. Now is the time to fish in South Florida, so lets make it happen.