The fishing is absolutely great in Miami. We are experiencing a lot of variety as far as fish species. Sailfish, blackfin tunas, mahis, kingfish, bonitos and an occasional wahoo are fish that we are catching practically every day. Springtime in Miami usually means great fishing and starting with the tunas it has been great. The blackfin tunas are now in the 30-pound class and some fish in the high 30âs have been caught. The best time to catch blackfin tunas is usually in the late afternoon, but so far this year we have been catching them consistently all day long. 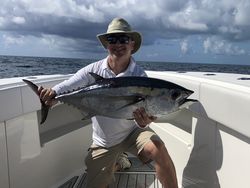 Kingfish have also been plentiful and although we havenât caught a big 40-pound king this season, we have had plenty of kings in the teens and twenties. Our big king is just around the corner. The best kingfish bite has been in the morning and has been tapering off by noontime. Sailfish are not around in the big numbers they were last month but we are still catching some on almost every trip. This past week we have also seen a big increase on mahis and most of the ones we have caught have been on the edge fishing with live baits. We are also starting to see a few mahis offshore in the Gulfstream and soon we will be focusing more on fishing the schools of mahis offshore, but for now the live bait fishing on the edge has been spectacular. Besides the tunas, kings, sails and mahis there have also been a good amount of bonitos around. Although not great table fare, they are certainly fun to catch on light tackle. When you combine all these fish, you can see that it is a very busy and productive day with most of the day fighting fish instead of waiting for fish to bite. 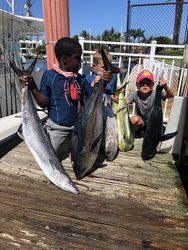 We also went to Bimini last week, and although we wanted to target mutton snappers, the snappers didnât get the memo. Being in the Bahamas though, you usually have many other options in case plan A fails. So we targeted yellowtail snappers and that was a huge success. Then we did some deep dropping and did very well with yelloweye snappers, mystic groupers and green snappers. Lastly while we were mutton fishing we were awarded with a big 50-pound black grouper. That was quite the fish! 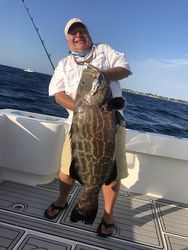 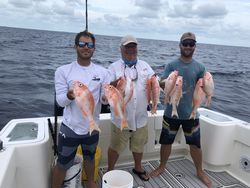 The only fishing that seems to have slowed down is the daytime swordfishing. We released a small fish one trip and then the next trip we had a fish on but pulled the hook on the way up. Both trips though those were the only bites we had all day.
Memorial Day weekend is coming up and I still have that Sunday open in case anyone wants to come and enjoy the great fishing we have going on right now. The beginning of June is pretty booked, but I have openings in the 3rd and 4th week of June and that is typically a great time for mahi fishing in the Gulfstream. So whether itâs fishing on the edge for variety or fishing offshore in the Gulfstream now is the time to call and reserve your dates!