Variety on the Kite 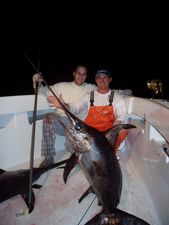 Since the last report, the sailfish bite has slowed down a little bit, but we are still catching 1 to 5 sailfish per day. Since the end of December, we have had only one trip that we didn?t catch a sailfish. That one trip though, we did catch dolphin and kingfish. We just got a real decent cold front today, and that should get the sailfish biting again.

Besides day fishing, we have also ventured out swordfish twice. Our first swordfish trip on the new boat was impressive. We got out and set out our baits as the sun was going down. About a half hour goes by and our long bait gets nailed. As we our fighting that swordfish, our second jug pops off and we are now fighting a doubleheader of swordfish. We got our first fish to the boat and released him since he was on the small size. We caught our second fish of the doubleheader and he measures out to 58? lower jaw fork length. As we were fighting the doubleheader, we had another swordfish swimming around the boat but wasn?t interested in what we had to offer. We set out baits back out and the front tip rod gets nailed. After a short fight we caught our third fish and released him as well. A few more minutes go by and the second jug get hit and we are now fighting our fourth fish that puts up a great battle. Some time goes by and we now boat a real nice 180 pound fish (69 inch Lower Jaw Fork Length). It?s only about 9:15 now and we get another bite on the deep tip rod. We fought that fish all the way to the boat and the hook pulled about 5 feet from the leader. At that point we were 4 for 5, the anglers had plenty of swordfish for the grill and were worn out, so we called it a night and were back to the dock by 10:30am. Our second trip was productive as well as we caught 2 out 3 swordfish and released both of them.

The next two weeks will be extremely busy. The Miami Boat Show is in town and with that come plenty of trips. Starting with tomorrow, I will be fishing every day and practically every night, so we should have some great stories and memories to talk about.

The last thing I would like to mention is that now is the time to reserve your dates for the Bahamas. I have already booked some days for the full moon periods (mutton spawn), so don?t miss out. Call early and lets get those dates booked.