The great thing about fishing in the summer is the amount of different types of trips we can do. Most of the fishing in winter is kite fishing for sailfish, and don't get me wrong I do really enjoy that. In the summer though, you can hunt for mahis in the Gulfstream, go bottom fishing or tuna fishing in the Bahamas, catch daytime swordfish, fish on the edge for sails, kings, wahoo, etc. There seems to be a bit more variety in the trips we can do. For the past few weeks, we have done exactly that. We did a trip to Bimini to target tunas and snappers. We found the birds in NW Channel and with that we found the tunas, unfortunately all the schools we found were composed of blackfins and not yellowfins. Don't get me wrong I’m not complain about catching blackfin tunas, but it would have been nice to mix in a few yellowfins as well. The snapper fishing on the other hand was very good. Both deep dropping was good as well as yellowtail snapper fishing on the reef. That's a good thing because we are heading back to Bimini this week targeting snappers and deep dropping. 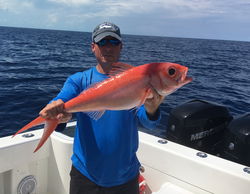 We also did another daytime swordfish trip and we caught another daytime sword. It was on our first drop and what a great way to start the day. The next few months and actually all the way into November we are going to see some of the best swordfish action of the year. It is actually very good right now, as I have seen a lot of fish being caught almost daily. The action will continue to get even better which is great because we have a number of bookings starting in July through October just for daytime swords.

We have also fished on the edge a few times and believe it or not, that has been very good. Usually the heat of the summer drives the fish off the edge, but surprisingly there are still quite a few sailfish around, as well as blackfin tunas (we caught three blackfin tunas on a half day trip yesterday) and as is the norm this time of year, there are a lot of bonitos around. Last week there were quite a few big wahoo on the edge and with the full moon tomorrow, the wahoo fishing should remain strong. There have also been a few fish on the wrecks.

Even though mahi fishing in the Gulfstream is a summertime event, someone forgot to remind the mahis. The past two to three years we have seen the best mahi fishing in over 20 years, but this year we have also seen the worse mahi fishing in quite a long while. The past few years there was a bunch of Sargasso weed in the Gulfstream, which provides habitat for the mahis as well as attracts bait for the mahis to feed on. This year we have seen a very limited amount of Sargasso weed. Everyone thought the mahi fishing would be good this year as May and early June were fairly good but late June and July have been very tough. There is a silver lining though for the rest of the summer and that is this past weekend we saw a ton of mahis in the Gulfstream, the only issue is that 99% of them were undersized. With that being said mahis grow very quickly and I can almost guarantee we will see bigger fish in just a week or so.

With summer halfway gone, now is the time to plan your summer trips before it’s gone.