Wahoo in the Bahamas 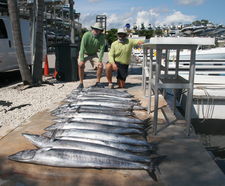 Fall is definitely here and al our fall species are cooperating. We had a banner trip to Bimini high speed trolling for wahoos, we have caught swordfish on all our sword trips, both day and night, and the sailfish bite is already picking up. Starting with the swordfish, we had a couple of day trips and one night trip and all trips produced at least one swordfish. Although none of the fish were huge, even catching a 100 pounder, day or night is still a lot of fun. We were lucky to have very nice weather on all or sword trips. Good weather and catching a fish definitely made the trips a lot better.
We also did a two day trip to Bimini in search of wahoo. We had heard of a few boats catching 6 to 8 wahoo per day a few weeks back and also heard of a few boats recently that got skunked. We were obviously hoping to do well and had high hopes for the trip. We left Miami, had a great crossing, cleared Customs in Bimini and checked into our rooms at the Sea Crest. We then got back in the boat and by 10:30 were setting out the lines on the edge. After setting the second rod out, we got a bite and had our first wahoo in the boat before even putting out our whole spread. This was hopefully and omen that the fish were biting and was hopefully not going to be our only fish of the day. Trolling to the south we got bit again but it looked like a lead bite where the wahoo actually bites the trolling lead and not the lure. We continued trolling and after 30 minutes we caught another wahoo. After 4 hours we had caught 7 wahoo and all were between 25 to 40 pounds. We got back to Bimini cleaned one of our fish and had that fish cooked at The Big Game Club. They did a superb job and it very well may have been the best wahoo I have ever eaten.
The next day the tide wasnt until 11am so we took our time, had breakfast at Capt. Bobs and then checked out of ou rooms. We again put them out in front of Bimini and we started catching singles at first followed by a few tripleheaders. We ended catching 11 wahoos in less than 3 hours. We caught our limit which is 18 wahoo and left them biting. Our last few bites were all tripleheaders. There is quite nothing like the sound of a wahoo bite followed by a double and then a tripleheader. Having all three reels screaming is a rush. Again we had a great crossing back to Miami and everyone was ready to plan another trip soon.

Back in Miami, the fishing has been fair and is getting better. We have caught sailfish on all our trips this past two weeks. Yesterday we had 4 sailfish bites on a half day trip and the water and conditions were looking a lot better with strong north current and bluer water. I heard that the guys up the coast a bit were already starting to see double digit releases which means the bigger packs of fish are on their way. Im trying to shoot more videos and attached is a link to our most recent sailfish video

Now is definitely the time to start planning your winter sailfish trips as well as getting in a trip for swords during prime time. Winter wahoo trips are also available but are subject to weather. Either way call me or e-mail me on any of those trips and I can provide more information. Looking forward to hearing from you and also fishing together.