The holidays are over and a new year has started. First off, I would like to thank all of my customers from 2017 for making it a successful and enjoyable year. We had a lot of repeat customers come back to visit us and also some new clients as well. Some of our new clients from 2017 have already made reservations for 2018 so they too are now part of our many repeat clients. 2017 was an average year business wise and an average year fishing wise as well. What I do see is that 2018 is off to a much better start as far as reservations already made for 2018 and weather wise we are experiencing some of the coldest cold fronts I have seen in a few years and the more cold fronts we get and the more severe the fonts are will only make the fishing that much better.
We finished up the year in a bang fishing everyday during the holidays (off course taking Christmas and New Years off). We caught mostly sailfish and a few mahis, some kings and some sharks as well as a white marlin on Dec 23rd. The white marlin we caught was on a half-day trip and the fishing that day was generally slow. I made a move farther up the line and put out a flatline while Brittany, my daughter who has been mating for me a little bit, helped me get the kites out. Before we could get all the lines out on the kite, the flatline spinning reel got bit. It sizzled some line out for almost half a spool as Brittany and I hustled to get the rest of the lines in to give chase to this fish. With all the lines in we started chasing down the fish and for 20 minutes it never jumped and we did not know what we had on. When it jumped I could clearly see the round dorsal fin and pectoral fins and yelled white marlin. It indeed was a white marlin and a big one. After a 2hour and 10 minute fight that took us over 7miles north and from 200 feet in depth to over 800 feet we finally got the leader on a 100-pound plus white marlin. We successfully released the fish to swim another day. 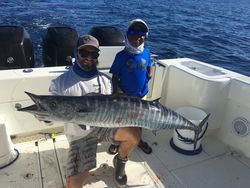 We also had a trip to Bimini this past week and did well with some big wahoos while high speed trolling. We also caught some yellowtail snapper on the reef and caught a few yelloweyes while deep dropping.
Back here it has been mostly sailfish and as I mentioned earlier the cold fronts we have gotten the past few weeks should make the sailfishing even better. I fished yesterday in what seemed for us Floridians as blizzard conditions, mind you it was in the high 40’s to low 50’s in the morning, warming up to the 60’s in the afternoon. We started down south which was a mistake as the water was green and a lot of south current. When we are sailfiishng we are always looking for north current. With no bites in over 90 minutes, I made a 20-mile run to the north and found a decent patch of water that had some blue in it. We raised a big pack of sailfish (over 10 fish showed up in our spread) and immediately hooked a quad (4 sailfish on at one time). Britt was mating for me again and after some successful coaching we kept all the lines from crossing and successfully released our sailfish. I know from experience that once we start seeing multiples from tripleheaders to quads, is when we are starting to see the main body of sailfish start moving through our waters. Its fun hooking them one at a time but it is awesome to have multiples of sailfish at one time. 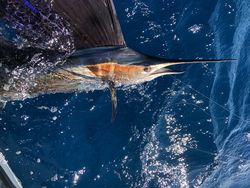 January still has some openings and now is the time to take advantage for our winter sailfishing in South Florida and a chance for most of the country to get out of the snow and the cold and come down to sunny South Florida. So give me a call and lets go fishing!