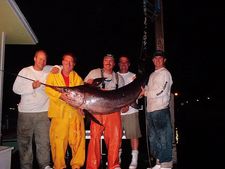 Since the last report, we have been fairly busy fishing a few days and a few nights. The day fishing has been very good the past two days. There have been quite a few sailfish around. We fished yesterday and caught 4 sailfish and a few dolphin. The water had good color, but south current. Having some current, even if it is to the south, is better than no current at all. Most of the fish we have been catching have been on the kite baits. There have also been some amberjacks and small muttons on the wrecks.

The swordfishing at night has been good also. We fished the Dark Side of the Moon Tournament and ended up winning it. I had good clients that have swordfished with me quite a few times as well as being the one that caught the tripleheader back in July, so they know the ropes. There were close to 40 boats in the tournament, but about 15 fish were caught. We got lucky catching three that night, including the heaviest weighing in at 172 pounds.

The night started off with a few fish caught between 56 and 55 inches. We then caught our first fish at 58? (lower jaw to fork length). It weighed in at around 90 pounds. The fleet caught a few more fish and then we hooked our second fish that tipped the scales at 172 pounds. Before the night was over, we had a few more that we lost and caught another fish at around 100 pounds. Right before lines out, we packed up all our gear for our run to the weigh station. We knew we had a good fish to weigh and were hopeful it was enough. The second biggest fish was 144 pounds so we had taken a good lead with only a few boats left to weigh fish. My buddy Chip came in next with a decent fish, but at 125 pounds, ours was still the leader.

It was a fun tournament and congrats to all the anglers for fishing it. That was the last swordfish tournament of the year, so we?ll have to wait until next year for the next one.

November is typically a great month for both sailfish and swordfish. This year, we are going to start a combo afternoon sailfish trip/evening swordfish trip. It will be a hard-core trip of 12 hours for the possibility of catching to different billfish in one day. Call me for more info, as this is definitely a trip for the hard-core guys!